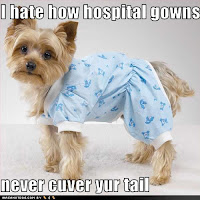 I spent some time at hospital recently.


Either that or they think it's a super dramatic clubbing sesh where everyone is making out and saving the day at the same time.

There are a lot of myths about hospitals and I'm going to bust some of them.

Myth: Hospital food is crap.
Hospitals aren't restaurants. The food isn't perfect, but it doesn't taste so bad that it makes you want to hunt down the chef and slay him either.


Myth: Surgeons leave behind tools inside you.
What goes in must come out. Tools are one of them.


Myth: Hospitals are like how you see them on TV dramas.
That's ridiculous, who thought of that? If hospitals were like Grey's Anatomy, I'd rather die. If it were like Scrubs, I'd laugh.


Myth: Surgeons work with hardly any sleep or food.
Would a person earning more than $100K a year really do that?


Myth: You wake up during an operation.
A plan is tailor-made to each patient by the anaesthetist to ensure you're sedated throughout the entire operation. Waking up can happen, but it's rare.

If it does ever happen, giving the anaesthetist a black eye is one option.

I spent a weekend in an intensive care unit. It was hardly intensive. The nurses were playing Solitaire on the computer the whole time!


Myth: Doctors do everything.

In TV dramas, doctors have the IQ fifty billion times more than everyone else. They're experts at everything!

What happened to nurses, pharmacists, lab technicians, radiologists and caterers?

Myth: Beneath every hospital there is a secret laboratory that builds an army of Frankensteins which will one day take over the world.
Now there's a thought!